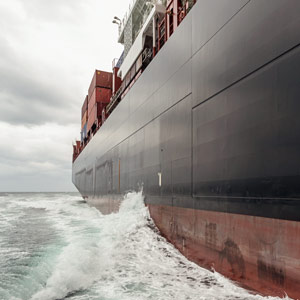 Over the past few years, the tides of the maritime industry have been changing. There’s a push for safer, smarter, more environment-friendly and energy-efficient sea transport. What no one expected is that these actions are not only bringing economic benefits, they are also leading to the servitization of the shipbuilding industry.

Long hailed as a less costly and greener alternative to other means of transporting goods, ships carry close to 90 % of the world’s trade and are instrumental to the global economy. But despite the benefits, growing demand is pushing their environmental impact to unacceptable levels. A chilling warning from top experts, published earlier this year in the journal Nature, claims the world has three years to stop climate change. Will this tried and tested industry step up to the challenge? There is hope ahead: new standards are in the making that promise not only to make shipping greener, but to redefine how the industry works.

If there is a need for a standard, the right place is ISO.

“Who would have thought that a standard could change the rules of the game for an entire industry? It’s really quite extraordinary.” Geir Axel Oftedahl, Business Development Director at Norwegian paint manufacturer Jotun Group, is talking about ISO 19030, one of the new environmental shipping standards published by ISO’s technical committee on ships and marine technology (ISO/TC 8). But what is this hull and propeller performance standard doing? And where does paint come into the story?

“Like with many other industries, one of shipping’s biggest enemies when it comes to environmental footprint is greenhouse gases (GHG),” says Koichi Yoshida, Chair of the ISO subcommittee on marine environment protection (ISO/TC 8/SC 2). These are directly related to energy efficiency, so the transportation sector is under great pressure to increase fuel performance. In 2012, shipping accounted for about 2.1 % of global CO2 emissions, but this has the potential to grow as more and more goods continue to travel by sea.

The International Maritime Organization (IMO) is increasing pressure on newly built ships by requiring higher fuel efficiency. This makes sense, but what practical solutions are there? You may be surprised to hear that addressing the performance of hulls and propellers is one way to achieve this.

“Part of a ship’s hull is in direct contact with water,” explains Oftedahl. “As it moves through the water, the ship uses energy to overcome frictional resistance on the wet part of the hull. The amount of energy used depends on the condition of the wet hull surface. If the surface is smooth, it will be much more efficient and require less energy than if it is rough. A similar logic applies to the propeller. Friction can account for up to 80 % of the resistance that a ship needs to overcome to move forward at desired speed – that’s about 80 % of its total energy use.” 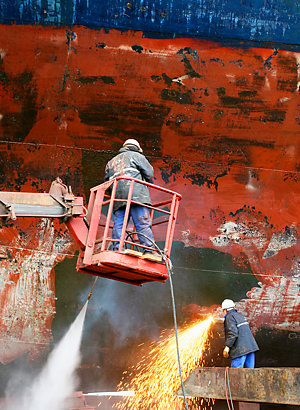 But the underwater environment is harsh and the hull and propellers are exposed to both mechanical damage and biofouling caused by marine organisms like slime, weed or barnacles that attach to the ship’s surface. What is really astounding is that these may easily increase resistance and thereby energy consumption by more than 60 %,” says Oftedahl.

According to the Clean Shipping Coalition, the only international environmental organization that focuses exclusively on shipping issues, the deterioration of hull and propeller performance accounts for an estimated 1/10th of the world fleet’s total energy cost and carbon emissions. This translates into billions of dollars lost annually and an approximate 0.3 % increase in man-made GHG emissions. Even a small change in frictional resistance can have a great impact on the energy required to move a ship at the same speed.

Shipowners and operators know this, so every three to five years a ship will go for maintenance to have the hull and propeller cleaned and repainted. The choice of paint is important as it should protect the hull from damage and keep marine organisms at bay. But so far, it has been very difficult to tell which paint systems are good and which are poor. “Shipowners often don’t understand the technology and chemistry, so they don’t pay attention to the impact it will have on their ships. They just want to get the lowest price per litre!” says Oftedahl. “It’s not surprising that most of the ships in the world’s fleet have been sailing around with quite a bit of biofouling, consuming much more fuel than needed.”

That’s where ISO 19030 promises to change everything. The three-part standard defines an innovative methodology that uses sensors to indirectly measure changes in the condition of the underwater hull and propeller, signalling the increase in frictional resistance as it happens. With ISO 19030, the industry will be able to collect enough data over time to get accurate averages of how hulls and propellers deteriorate, so that, eventually, shipowners can be more proactive in addressing problems.

The impulse for the standard was given a few years ago when Jotun started working on a methodology to measure the performance of its paint products for hulls and propellers. Although hesitant at first, the company soon realized the value of putting its findings in the public domain. So, together with the Bellona Foundation, an environmental NGO, and the Clean Shipping Coalition, it approached the IMO emphasizing the need for a common methodology. “Someone in the room raised their hand and said, if there is a need for a standard, the right place is ISO,” Oftedahl recalls.

Jotun is already using the standard to offer unique personalized contracts to its customers. For a prescribed fee, it agrees to deliver a specific level of performance based on ISO 19030-2. If the company fails to meet its ­promised performance, it charges less or pays out under a cash-back guarantee depending on the commercial model. It’s a decisive move away from a product-based to a performance-based industry.

Put differently, ISO 19030 has led to the servitization of paint, and this is also changing the way ship manufacturers think. When someone wants to buy a new ship, the first thing he does is go to the building yard to decide on technical specifications. But for the first time, earlier this year, a shipyard manufacturer, instead of just noting the technology that would go into the hull, referred to ISO 19030 to prescribe an expected performance. “If we continue in this direction, ISO 19030 could well reinvent the way the industry works,” concludes Oftedahl.

Like ISO 19030, other ISO standards can help the shipping industry make better decisions. Anti-fouling paint, for example, can contain chemicals that harm the marine environment. ISO has therefore developed a risk assessment standard to evaluate the negative impacts of biocidally active anti-fouling paint, and is now working on test methods for screening these products in controlled conditions. “Understanding how to measure and/or sample data is important. Knowledge is the first step towards action,” says Dr&nbspCarolyn Junemann, Secretary of ISO/TC 8/SC 2.

High-tech to the rescue

Surprisingly, some of the greatest ecological hazards come from nature itself. For example, not only does biofouling affect the energy performance of a ship, it also poses a risk to the marine environment. The organisms that attach to the hull are taken to new habitats where they could reproduce and out-compete native species, a bit like pests.

ISO 19030 could well reinvent the way the industry works.

That’s also the case with ballast water, which is held inside tanks to increase the ship’s stability during transit. When this water is discharged, it could potentially introduce invasive non-native species into the local environment. “ISO is working on standards for sampling ballast water, so that ships can be properly outfitted to monitor discharged ballast water and thus mitigate the risk of translocation of species,” explains Dr Junemann, who is also Convenor of the ISO working group on aquatic nuisance species.

Because ISO responds to the needs of the industry as well as those of society, these standards result in both economic and environmental benefits. “The committee is quite excited to have started work on a standard for the calibration and measurement of shaft power, which is a function of the ship’s speed and is a key factor in determining efficiency. This could be another game changer for the industry,” says Dr Junemann.

As the demand for goods to be taken overseas increases, and the timeline to take environmental action closes up, the industry will continue to look to ISO to deliver the technical specifications and measurements the shipping world needs today.

ISOfocus
Transport trends
An overview of recent trends and near-term prospects for the transport sector at a global level, as well as the long-term outlook for standards in the industry (maritime, air and land).
Maria Lazarte
Elizabeth Gasiorowski-Denis
Editor-in-Chief of ISOfocus