What’s wine got to do with it? 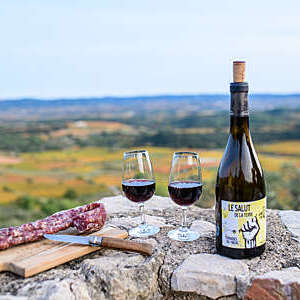 2020 threw most industries out of whack, and with bars, restaurants and borders closed, one of those that was severely hit was wine. In France, the world’s second-largest wine-producing country, a recent study showed that while the crisis didn’t impact the industry quite as badly as expected, not all were treated equally. As consumer behaviour shifted towards buying online and making more ethical choices, it was clear that those who were able to adapt quickly and take a more socially responsible approach would survive to tell the tale.

Increasingly aware of changing trends and the impact of the industry on society and the environment, more and more wine producers are turning to ISO 26000, Guidance on social responsibility, to help them make their contribution a more positive one. We talked to some CEOs of wine-growing estates about their social responsibility journey and what the future holds for the world of wine.

It would be difficult to imagine a France without wine. With more than four billion bottles produced each year, wine sits right next to the famous baguette at the French cultural table. What’s more, it helps to draw in millions of tourists, generates EUR 13 billion in exports and employs half a million people.

Making the world a better place with wine might sound like a play on words, but when you’re basking in the sun of the beautiful Languedoc region with the vines swaying in the warm breeze, it’s not so hard to believe. “Each day, our team works to vinify a better world,” quips oenologist and winery owner Bruno Le Breton, without a smirk in sight. “From the vine to the recycling bin, every one of our stakeholders follows our philosophy of social responsibility founded on the principles of sustainable development.”

It might sound like marketing speak, but for Domaine de la Jasse, Le Breton’s family-run, 56-hectare winery situated on the outskirts of Montpellier, it’s not about the look. Producing around a million bottles a year, with a proud and committed staff of 12, they were the first of their kind in France to implement ISO 26000 in 2015. “Not many people in France understand social responsibility, so labels such as ‘organic’ are more powerful when it comes to marketing. But ISO 26000, while hard work, helped us to really see what our challenges were and to reflect on everything we do,” he says.

Not so far away in Montpeyroux, the wine cooperative Castelbarry echoes this thinking. “It’s difficult to explain to consumers what social responsibility means for us as a wine producer,” says Bernard Pallise, Director-General of this 12-employee business that brings together 108 viticulturers in the region. “But implementing ISO 26000 was a logical extension of our organizational culture that believes in democracy, playing a positive role in the local community, solidarity and respect.”

Moving a little farther north into the Rhône Valley is Maison Gabriel Meffre, one of the biggest wineries in the region, employing 130 people and covering all aspects of wine production, from winemaking to blending, to bottling and shipping. With over 14 million bottles sold every year, the Domaine is already operating in an environmentally conscious manner. No greenwashing here. “It was important that we took an approach that was structured and evaluated – a true undertaking on all levels,” explains CEO Etienne Maffre.

Since users of ISO 26000 cannot be certified to the standard, all three organizations took advantage of the certifications “RSE Engagé” or “Vignerons Engagés” (see Box) created by AFNOR, ISO’s member for France. This not only allowed them to clearly communicate their approach and fuel the movement, it provided a means of being held in check by a third-party evaluator.

So much more than a grape

While grape growing sits in the agricultural sphere, wine goes far beyond it. “There is nothing natural about wine,” says Bruno. “If we leave a wine to produce itself naturally, it’s called vinegar. We are 100 % in the world of culture.”

Wine tourism, wine real-estate, wine clubs, wine courses… so much of the industry has less to do with wine than the world it lives in. The price of wine real-estate in some parts of France, for example, has evolved far beyond anything to do with the price of the bottle. The Burgundy region is a classic example, with the sale of Clos de Tart in 2018 for a record EUR 220 million. That’s some EUR 29 million per hectare for a winery, albeit a very prestigious one, producing just 25 000 bottles a year. Hard to justify the return on investment with the wine alone, no matter how good it might taste…

All of which influences the entire market. And for the average winemaker in France, it’s an “affair of the heart” to provide an experience that seduces consumers and encompasses their values. For these wineries, it means a sustainable future – a winning approach in times like these. “It’s true that those we know in the industry who have embraced the social responsibility journey have fared much better,” says Etienne. “There is more agility, more information sharing, and everyone works closer together to understand the challenges and find solutions.”

At Domaine de la Jasse, they not only survived the pandemic – they thrived. “The pandemic for us was a huge success!” enthuses Bruno. Despite the fact that 95 % of the Domaine’s wines are exported, its strong ties with loyal clients resulted in strong sales. Castelbarry, too, saw few negative effects. “There is more solidarity,” says Bernard. “It makes a difference.”

It would be difficult to imagine a France without wine.

Help your organization to operate in a socially responsible way with this standard.

So how did they all get started on their socially responsible journey? The first step was to conduct an initial evaluation of their current social responsibility status, analysing risks, identifying strengths and weaknesses and defining strategies. This was a hefty but necessary and worthwhile task, and stakeholders played a significant role. “Not only are they affected by every decision the organization makes,” says Etienne, “they are part of the solution. Particularly the staff.”

“We wanted to find projects that made an impact and motivated our people, and we were amazed by how enthusiastic everyone was,” he says. “We nominated a project leader, organized a number of meetings and now follow a structured process of identifying and measuring projects every year, so everyone can see the difference that they make.”

These projects include everything from water and energy management to health and safety at work, among many others. Staff health and welfare are also given more attention and a project is now underway to highlight the staff involved in a local association and communicate about its purpose. Unsurprisingly, staff satisfaction has improved as a result.

Involving the local community is an integral part of the process. In addition to donating to local projects and offering internships to industry newcomers, Domaine de la Jasse has also been making its vines useful to local businesses. For example, a study by a local company of the effects of using human urine to irrigate and fertilize the vines produced more than just a few happy grapes. It also gave valuable exposure to the business undertaking the project and helped to advance the technology that could potentially save substantial amounts of water in a hot, dry and very thirsty region. “Thanks to the thought required to implement ISO 26000, we understand better just how useful we can be,” concludes Bruno.

Castelbarry is also a pillar of its community, providing opportunities for young viticulturers by pairing them up with those more experienced to learn the trade. They also work to avoid vineyards being sold off and used for other purposes. “If someone bought a vineyard with the intention of pulling out the vines and building a big house that is out of character with the region, for example, it could destabilize the surrounding vineyards, completely change the landscape and the image of the appellation,” says Bernard.

Let’s not forget the environment

While wine is cultural, the industry is still largely dependent on the environment, and the beginning of 2021 dealt a harsh blow with the spring freeze in April, which ruined up to 100 % of some vineyards’ crop. Events like these are increasingly common. In the last four years, notes Bernard, the industry has been victim to some pretty extreme weather. “We try hard to respect the environment,” he says, “because we know we are responsible for the effects of today, and for what will happen tomorrow.”

It is for this reason that vintner members of Castelbarry are required to adhere to environmentally friendly requirements that go beyond those of the “appellation”, related to things such as water and pest management. They also have a project to accompany 20 of their vintners over two years, helping them to reduce drastically, if not completely, the use of any chemicals on their vines. An initiative that could be extended to others in the future.

Maison Gabriel Meffre has also been operating in an environmentally friendly manner for some time and, by 2023, aims to have at least 50 % of its production labelled HVE (Haute Valeur Environmentale). It is also proud to say it was the first to develop a label-free wine bottle using relief engraving that weighs just 400 g (the average weight is 500 g+). This has allowed it to save 2 010 tonnes of glass since 2009 when the project began.

And it is not just about large-scale actions, the devil can be in the detail. Viticulture members of Castelbarry, for example, are required to use pheromones instead of chemicals to ward off destructive butterflies, which even come in biodegradable diffusers.

ISO 26000 is a long and difficult journey, all three men agreed, but one that has delivered its fruit – literally. It has shone a light on opportunities, remarks Bruno, and all the activities or ways of working that no longer made sense.

A wisely thought-out strategy was imperative for all of them, but not in the hope of gaining any expected glory. While they all saw an improvement in their wineries’ reputations, that would have been a foolish reason to take the task on, they say. Instead, what’s needed is a true desire to produce something of value with less impact on the planet, and to bring a bit of sunshine into a brutal, changing world. Let’s raise a glass to that!

ISO 26000 is a social responsibility standard that is not certifiable. Recognizing the desire for organizations to communicate their efforts to a wider public, AFNOR, ISO’s member for France, developed its own certification mark – the “Label Engagé RSE” – based on ISO 26000. Organizations that fulfil the recommendations of ISO 26000 are evaluated and rated on a scale of 1 to 4, with Level 4 being “exemplary”. Taking it one step further for the wine industry, AFNOR partnered with the association Vignerons Engagés to create an industry-specific certification.

What is social responsibility?

“The responsibility of an organization for the impacts of its decisions and activities on society and the environment, through transparent and ethical behaviour that contributes to sustainable development, including health and the welfare of society; takes into account the expectations of stakeholders; is in compliance with applicable law and consistent with international norms of behaviour; and is integrated throughout the organization and practised in its relationships.”