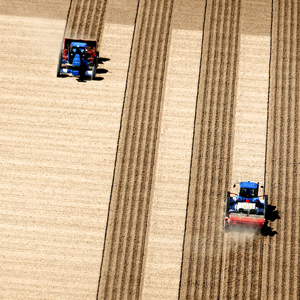 Companies created quite a buzz this year with the announcement that their plans to use drones to deliver packages are becoming a reality. As the technology continues to evolve, the number of users of, and uses for, unmanned aircraft systems has risen to new heights. The need for an International Standard is clear, but what’s the link with farming?

More than seven billion lives depend on humankind’s unique ability to scratch into the shallow surface of our planet and grow plants. And though the crops are firmly rooted in the soil, the mysterious thing that makes it all work can only be grasped by looking to the skies.

Water and carbon dioxide are transformed by plants into sugar (and water), fuelled by the power of the sun. But ask the farmers who make their living from this miracle and their take on it is probably more down to earth: while sunshine and air for photosynthesis are free, labour, fuel, sprays and fertilizers comprise a substantial cost. Often, even water comes at a price, both financially and environmentally. In order for farmers to stay in business and keep up with our burgeoning population (in fact, it has grown by about 50 people since you started reading this), we have to use these resources better, and that’s where precision agriculture comes in.

The idea has been around since the 1980s, but current technology is making this a reality in ways that most of us couldn’t have imagined back then. For the answers, we can look to the skies again. Or rather to Cortney ­Robinson, ­Secretary of technical committee ISO/TC 20’s subcommittee SC 16, which standardizes unmanned aircraft systems (UAS), or drones as they’re more commonly known. 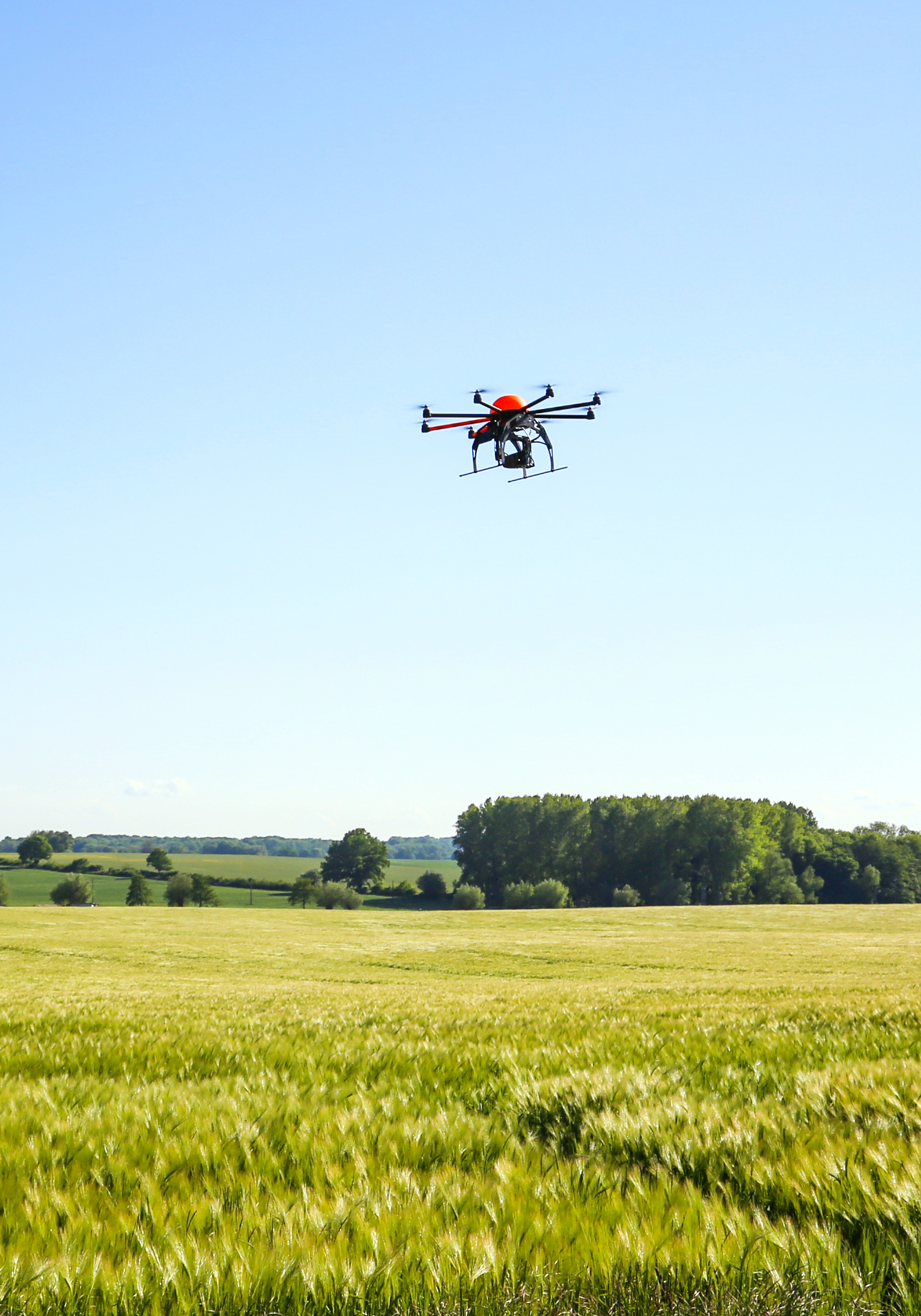 Robinson, Director of the Civil Aviation Infrastructure at the Aerospace Industries Association (AIA), is coordinating a group of experts to create an International Standard for drones – ISO 21384. The scope of their work is ambitious, with three parts covering general specifications, product systems and operational procedures, respectively. It’s worth noting that Part 1 specifies general requirements for UAS for civil and commercial operations only; it does not cover state or military use, though governments are welcome to apply them.

The general specifications of Part 2 give requirements for the design, manufacture and continued airworthiness of any UAS, which, as you’ll see later, is a term that covers more than just the drone itself. ISO 21384-3 will specify the requirements for operational procedures. The time frame is demanding, with publication currently scheduled for 2018.

For industry insiders, an International Standard can’t come soon enough. “The cost of unmanned aircraft has come down dramatically and that’s contributed to an explosion in their popularity with both hobbyists and commercial operators,” Robinson explains. This is clear to see from the register that the US Federal Aviation Administration (FAA) maintains for all flying vehicles. “Although voluntary for smaller drones, most enthusiasts choose to register their drone under the ‘know before you fly’ scheme, and the numbers have jumped dramatically. The total number of US-registered aircraft [manned and unmanned] surged from around 260 000 aircraft in 2015 to more than 750 000 UAS alone today.”

Public concern around drones is growing at almost the same rate. Whether issues around privacy, vehicles operated by inexperienced users, or modified inappropriately (a number of terrifying examples can be found on YouTube), the current response in the USA is a mix of FAA regulations, industry guidelines and common sense. The AIA, as “the voice of American aerospace and defense”, is leading an effort with the FAA to integrate UAS into the American National Airspace System.

The approach varies greatly by country, but in many, as Robinson explains, “a risk-limitation approach is operated by classifying vehicles according to their size [total mass including payload], and the altitude at which they operate”. This combination leads to a risk categorization where, for the top categories, operators are required to have the same level of competency as if they were sitting in the cockpit themselves.

When it comes to farming, unmanned flights can operate at a fairly low altitude (often, less than 120 m, which is a threshold ceiling in some jurisdictions), and all but the largest models are exempt from the need for specific licences on behalf of the operator. With many drones, particularly when it comes to mapping, in-flight behaviour is controlled by software.

More than the sum of its parts

In fact, remote operation and control through software are defining features of drones. To understand the difference between a UAS and a hobby flyer’s scale model, we have to think past the craft itself. The airborne part of the system is either a fixed-wing craft, resembling a small aeroplane, or is powered by rotors, often four, commonly referred to as a “quad-copter”. Other elements include the ground-control part, a “remote-pilot station” that could be a dedicated building, a laptop or even a smartphone. It plans where the drone should go, how it should react to maintain its course and what information it should collect. The drone and remote station work together thanks to the command-and-control links, the third and final part of the system, that maintain ground-to-air communications. These facets beyond the craft itself are also part of the work of ISO/TC 20/SC 16.

Flight patterns for agriculture typically use a number of overlapping passes up and down the rows of crops. Imagine a field of wheat in, say, Canada. In the prairie states that are so well suited to growing this cereal, a farm could be as large as 1 000 ha (a field 2 km wide and 5 km long). On foot, it would take about four hours to cover just the perimeter, yet with the right set-up the whole area can be precisely mapped by drone in the same time.

Several things become clear. Drones can take accurate measurements much faster than a farmer can “walk the field”. At this scale, the quantity of inputs, and thus the potential savings, are enormous (this one hypothetical field could swallow 150 tonnes of nitrogen fertilizers each year). The growing conditions across such a large area are quite variable (some plants may have deep, moist soil whilst other patches will be stony and dry; unwanted insects or fungus could have established colonies in one area but not in another; some plants will be tall while some seeds will not even have sprouted…).

From pixels to bushels

If farmers could build a clear map containing all of this information, then they would potentially be able to spread fertilizer where the soil is poorest, irrigate only the driest spots and spray just the plants that need protection from pests. The potential to save money is huge, but more than this, healthier plants mean higher yields. It’s a textbook win-win: a money-saving, profit-boosting, tech-led way of farming that helps protect our environment while feeding the planet.

But how can such a map be created and, once it exists, how does a farmer translate this into action? One man who knows is Jorge Fernandez, an image processing expert and agriculture solution manager at software company Pix4D. The Switzerland-based outfit, created in Lausanne in 2011, develops cutting-edge software that converts images taken by drone into what Fernandez calls “survey grade, radiometrically and geometrically accurate 2D reflectance maps (the basis for the popular NDVI map) and orthomosaics, as well as 3D point clouds and surface models”.

There are many applications for their work, from real-estate and surveying to spectacular 3D models of Californian giant redwoods that give researchers a new perspective on the CO2 absorbed by the world’s oldest living plants. But for the plants that fuel human life, those that are generally sown, harvested and eaten each year, how does the software work? Fernandez explains: “There are basically three phases: first, data is captured in flight; then, the millions of points of data are interpreted and fitted together to create a map that accurately captures the reflectance of the plants, independently of weather conditions; finally, the farmer, or often a consultant agronomist, prescribes a remedy based on the index maps that have been generated.” This remedy generally specifies the level of input for each part of the field.

More than meets the eye

The important thing to note is that the drone is usually carrying something a little more sophisticated than a basic camera. “For farming, one of the most common options is to use a multispectral sensor. It’s similar to a camera but has five separate lenses, each for a different colour of light.” Some of these wavelengths can’t be detected by the human eye, yet are key for photo­synthesis. So how does it work? Fernandez again: “Wavelengths outside of this range can tell us things such as whether a plant is stressed, or if it is affected by a pest even before the symptoms can be seen during inspection. The farmer can then go in for a closer look to identify the cause.”

One of the more common types of map is known as NDVI (Normalized Difference Vegetation Index), which shows up where bare spots in the field are that can’t be seen with a regular photograph or from the ground. “It’s a very reliable indicator for hydric stress,” Fernandez says, pointing out that engaging a professional, or even directly purchasing a drone system, is a worthwhile investment since “recurring patterns of stress can be identified, meaning that longer-term plans can be developed for problem spots, and farmers can get the most from their land year on year.”

All you need is less 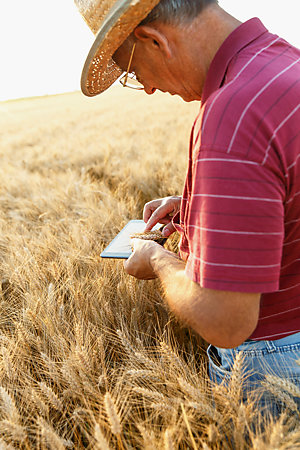 As humankind continues to grow, so does pressure on resources and farmland. While future technology may offer us new ways to further increase our productivity, it seems unlikely that we’ll see anything like the fourfold increase in yield that the early 20th century saw with the invention of the Haber-Bosch process and synthetic fertilizers. But considering that the process takes the equivalent energy of one litre of fuel-oil to turn nitrogen in the air into just one kilogramme of fertilizer, it seems that the answer is perhaps to do with using less in the first place.

Taking advantage of the very latest technology in crop protection and nutrition, using water more sustainably, and basing agronomic plans on hard data, sounds like a formula for success. The latest generation of unmanned aircraft is bringing that possibility to increasingly large numbers of farmers, including in developing countries. As their use spreads wider, bringing rural populations into contact with drones, an International Standard is urgently needed to keep operators and bystanders safe, and to get the most from the technology. Fortunately, ISO/TC 20/SC 16 is on the case.

We examines how high-tech farming techniques and technologies can improve production output while minimizing cost and preserving resources.