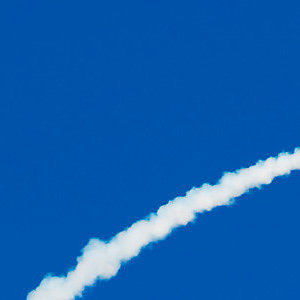 From fly-by-wire to supersonic and hypersonic, technology is heralding a new age of air travel. And with the number of air passengers set to rocket over the coming decades, how are aircraft shaping up to meet the challenges of the 21st century?

Meet George Jetson! Some of you may already know him, but for those who donʼt, George is the head of the cartoon space-age family The Jetsons, “the family of the future”. Briefly in the 1960s and then in the 1980s, George and his family zoomed around our TV screens in their bubble aerocar. They lived in a futuristic, push-button world of robotic contraptions and labour-saving household gadgets. And why do we need to meet George? Because the Jetsonsʼ candy-coloured world, with all its “hi-tech” devices – from their “smart” watches for teleconferencing to their “smart” transporters, domestic robots and home computers – has turned out to be remarkably prescient. The Jetsons had their own Internet of Things; they just didnʼt call it that.

Fast forward to today, and in our own increasingly interconnected world we, too, like the Jetsons, think nothing about hopping on to (decidedly clunkier-looking) aircraft and zooming around the globe, from daily short-haul commutes to long-haul destinations. We want to reach our destinations quickly, as cheaply as possible and – of paramount importance – safely. And advances in the material properties used in aircraft manufacturing, which have improved and enhanced the performance and operations of aircraft, have indeed helped us to travel more quickly and inexpensively around the world.

Commercial aviation is a rapidly expanding business. The International Air Transport Association (IATA) says the airline industry is progressing from carrying 3.8 billion passengers today to 7.2 billion passengers in 2035. The commercial aircraft fleet, which now numbers 100 000, has had to keep up to match demand. According to the International Civil Aviation Organization (ICAO), by 2036 about 94 % of the commercial aircraft fleet will be new-generation technology.

One big challenge for the aviation industry is how to meet this growing demand with fuel efficiency that delivers lower carbon emissions. As the demand for air transport has grown, and with safety the predominant requirement, we have dramatically changed the way aircraft are designed, operated and powered. Aircraft are now 70 % more fuel-efficient than in 2010 (IATAʼs Vision 2050 report). Weʼre not in the Jetsonsʼ league yet, but weʼre getting there.

The major aerospace companies are aware that, as the aviation industry continues to grow, so does their responsibility to ensure that the environmental impact is kept to a minimum. So how are the big players tackling the challenge of meeting the rapid growth in air traffic with fuel efficiency that eliminates aircraftsʼ carbon footprint? What steps are they taking to develop aircraft that are lighter, smarter and greener?

Composite materials play a significant role, as they enable lighter and more fuel-efficient aircraft. Take Boeing, for instance. The aerospace giant has been using composite materials in 50 % of the airframe structure of its B787 Dreamliners, compared to about 5 % in the original Boeing 747, from the late 1960s. And, to further underscore its commitment to a greener industry, Boeing recently commended the ICAO adoption of a carbon-offset system that will help the international aviation industry achieve its goal of reducing emissions. Boeing said: “The market-based carbon-offset system and CO2 standard are integral to the four-pillar approach the industry is taking to stop the growth of emissions by 2020 and cut them in half by 2050 relative to 2005 levels.”

Of its own products and services, Boeing said it is continually innovating to improve their efficiency and environmental performance. “The 787 Dreamliner family reduces fuel use and CO2 emissions by 20 % to 25 % compared to the airplanes it replaces. The 737 MAX, with first delivery expected in 2017, will reduce fuel use and emissions by 20 % compared to the original Next-Generation 737.”

And Airbus, another world aerospace leader, is doing its part by using innovative solutions to improve the economic efficiency and environmental performance of commercial aviation. Séverin Drogoul, Airbus Groupʼs Vice-President of Business Improvement & Quality, says the Groupʼs goal is eco-efficiency – building aircraft that minimize environmental effects. He said: “To meet our goals, we are looking at the whole life cycle of our aircraft, from design to manufacture, in-flight operations to end-of-life, and at each stage in the life of an aircraft we are finding the solutions to improve our environmental performance.”

Drogoul says Airbus is finding solutions to these challenges through new ideas, technologies and processes. To that end, eco-efficiency is “embedded” in all Airbus product development, industrial operations and services.

This holds great promise for the future, but how can we be sure that the passenger – and the planet – is being best served? ISOʼs new subcommittee on materials, ISO/TC 20/SC 18, goes some way to answer this.

The scope of the new subcommittee will cover the standardization of materials and related processes used by aircraft and engine manufacturers. As a result, designers will be driven to make greater use of International Standards, thereby reducing the use of different national, regional and company standards. As well as specifying industrial requirements for materials in the form of International Standards, the proposed standardization will consider the environmental aspects. This is intended to anticipate the obsolescence and renewal of products used by the aircraft and engine manufacturers as they are replaced by new technical solutions.

Given the accelerated emergence of new products and materials in the aviation industry, there is no better time for standardization of composite materials used by the aircraft and engine manufacturers. It will not only address the urgent need to improve technical communication within the supply chain, but also with the airworthiness certification bodies on the acceptable defects. Clearly, with the major aerospace players being competitive in all areas, the new subcommittee has a key role.

The aviation industry is also participating in the circular economy. Plant-based fibre products are being used to drive weight savings and increase opportunities to recycle and virtually all aircraft interior materials are now made of recycled components. Thanks to nanotechnology, aircraft cabin interiors are also lightweight and “self-freshening” so they always appear to be “new”.

EasyJet, for example, was one of the first commercial airlines to use a “nano-coating” on its planes, a polymer coating that repels dirt and dust to reduce drag, cutting fuel consumption by as much as 2 %.

As mentioned earlier, the Jetsons had their own version of the Internet of Things (IoT). But what will its impact be on the aviation industry today and in the future? Peter Ryan, Honorary Fellow within Australiaʼs Defence Science and Technology Groupʼs Aerospace Division, said: “Aviation is highly regulated, slow to introduce change, and highly focused on safety. A strong business case would be needed for a wholesale change to IoT technologies.” Therefore, he sees a gradual introduction of IoT for aviation in the next five years, mainly in ground operations such as baggage handling (already in use in some airports).

From 2020 to 2025, Ryan reckons IoT will play a more significant role in airline logistics and aircraft maintenance, and from 2025 to 2030, he sees IoT being introduced into flight operations to improve aircraft performance. IoT will also improve aircraft efficiency. Ryan says aircraft system monitoring will be enhanced by IoT devices providing diagnostics on performance. Modern engines, for instance, currently have up to 200 sensors; future engines could have 5 000 sensors collecting vast quantities of performance data. This will enable engines to run more efficiently.

And from the safety viewpoint, Ryan says, when aircraft are connected to each other, they can avoid accidents and calculate optimal flight trajectories to reduce travel time and fuel. At present, aircraft positions are mainly monitored from the ground and only flight controllers have a full picture of where aircraft are located (although satellite tracking is now coming into play).

Airlines are already using or trialling technologies such as:

Ryan adds that IoT devices could also enhance piloting skills, giving instant feedback not only on the pilotʼs own aircraftʼs position and status but also on nearby vehicles. They can also give advance warning of extreme weather risks.

As it happens, Boeing celebrated its hundredth anniversary in 2016. In the July 2016 issue of Frontiers magazine, Boeing painted its own vision for the next hundred years, a vision based on “our spirit of adventure and continuous desire to explore the universe”. Brian Tillotson, Systems Technology Chief Engineer at Boeing Research and Technology, envisions a space colony for families of the future. “Itʼs really about how you do the plumbing, mow the grass and raise and educate children in that environment.” Remind you of anyone?

Another colleague, Kevin Bowcutt, Boeingʼs Chief Hypersonics Scientist, says he is determined to build a hypersonic aircraft, which can traverse the globe in a few hours. He says it would fit perfectly into what he says will be our perfectly automated world. “You could type in ‘Parisʼ on your mobile phone and an unmanned car comes to your house, your phone beeps and you go out and hop in. It takes you to the airport and it takes out your luggage and you get on an airplane or some hyper-tube-type thing that takes you across the ocean.”

Airbus has also been busy working on its vision for the future. As Drogoul points out, by 2030, 60 % of the worldʼs population will live in cities, which is 10 % more than today. Traffic jams will become even more horrendous, taking a huge toll on the economy. To tackle this challenge, itʼs no surprise that the experts at Airbus are looking skywards “to develop radical concepts that will relieve urban congestion”. Working with A3, its innovation outpost in, where else, Silicon Valley, Airbus is pursuing a project called Vahana, which Drogoul describes as “an autonomous flying vehicle platform for individual passenger and cargo transport”.

And Sir Richard Branson, the Virgin Group founder, announced recently that he was planning new supersonic passenger flights across the Atlantic, unveiling a prototype aircraft that can fly London to New York in three-and-a-half hours. He has joined up with Boom, a Denver-based start-up company. Blake Scholl, the founder and CEO of Boom, said: “Sixty years after the dawn of the jet age, weʼre still flying at 1960s speeds. Concordeʼs designers didnʼt have the technology for affordable supersonic travel, but now we do.”

From fly-by-wire to supersonic and hypersonic, the flightpath for the aviation materials sector has never been more exciting. So, settle back, fasten your seatbelt and prepare for take-off. You might just find George Jetson in the next seat.

Our flightpath to the future

Flying is more popular than it has ever been. Once seen as a luxury that only a privileged few could afford, air travel has become a genuine form of mass transport over the past few decades