Robots and humans can work together with new ISO guidance 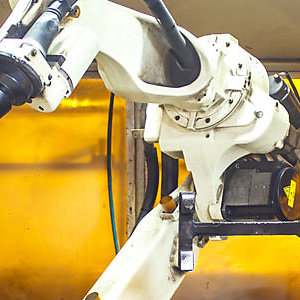 Collaborative robotics is when automatically operated robot systems share the same workspace with humans. It therefore refers to a system or application rather than a particular type or brand of robot. Industrial robots do not include an “end effector”, that is, the device at the end of a robotic arm that interacts with the environment while a robot system does.

Industrial robot systems are usually separated from humans to protect people from injury. However, with new technology advancements, there is growing potential to safely bring the power and precision of robots closer together with the creative and problem-solving ability of humans. This could dramatically increase productivity.

Roberta Nelson Shea, Convenor of the ISO Industrial Robot Safety Working Group (ISO/TC 299/WG 3), explains, “When working on the standards for safety of industrial robots (ISO 10218-1 and ISO 10218-2), a philosophical discussion arose. If an application will not hurt and injure a human, why not allow contact? As a result, ISO 10218 discusses four techniques for collaborative operation. Work on ISO/TS 15066 started with the idea that, if there were to be any incidental contact between human and machine, it shall not result in pain or injury.”

“The fact is,” explains Carole Franklin, Secretary of ISO/TC 299/WG  3, “when robots work alongside humans, we have to be very careful that the application does not put a human in danger. Up until now, robot system suppliers and integrators only had general information about requirements for collaborative systems. ISO/TS 15066 is therefore a game changer for the industry. It gives specific, data-driven safety guidance needed to evaluate and control risks.”

The new technical specification opens up many opportunities for the industry. It will reassure and guide both robot system developers and users, encouraging investment, development and application of this technology.

In collaborative robotics, humans and robotic equipment can have an overlapping workspace where both perform tasks. ISO/TS 15066 provides guidelines for the design and implementation of a collaborative workspace that reduces risks to people. It specifies:

This is, of course, just the first step for a developing industry. ISO/TS 15066 provides a foundation for work in this area, since we expect to learn more as applications are deployed and technology develops.

With ISO/TS 15066, the traditional guards and protective devices that kept humans and robot systems apart might no longer be necessary for some of the power- and force-limited applications implemented in accordance with ISO 10218-1 and ISO 10218-2. The technical specification includes data from a study on pain thresholds of different parts of the human body. This information can be used to develop and implement collaborative power- and force-limited robot applications.

Another way to facilitate human and robot system collaboration is through speed and separation monitoring techniques. In such systems, a minimum safety distance between the robot system and the person is maintained to avoid contact. Imagine a robot system integrated with a protective device that senses humans. The robot system then moves away or “dances” with the human. So if you take a step forward, the robot system moves one step back. The technical specification offers detailed guidance on maximum allowed speeds and minimum separation distances. It can inspire further advancements of protective device technology as well as the development of materials to soften physical contact, better sensors, improved motion control and other innovations.

Even if a robot system is not moving, a person can theoretically walk into it, the way someone might walk into a wall. The working group addressed this by requiring that sharp edges and protrusions be minimized for the entire system and associated equipment, so that if a human were to impact machinery, they would be no worse off than if they did walk into a wall.

ISO has a new committee dedicated to robotics (ISO/TC 299).

ISO/TS 15066:2016, Robots and robotic devices – Collaborative robots, is available from your national ISO member or through the ISO Store.