The ISO/TC 211 Harmonized UML Model and Resources for Implementation

Structured models of concepts for the digital representation of geospatial information and for the services for accessing the information have been an essential part of standards developed by ISO/TC 211 since the committee was established in 1994. The committee resolved to use The Unified Modelling Language (UML) as the conceptual language for standards already in 1998 and have later standardized the use of UML in ISO 19103 and ISO 19109. The first steps towards harmonizing UML models from different ISO/TC 211 standards started in 1999. The Harmonized Model Maintenance Group (HMMG) was established in 2002 to maintain a repository of harmonized UML models of ISO/TC 211 standards and projects. The UML models are maintained in the Harmonized UML Model, which contains all UML models developed and standardized by ISO/TC 211. In total, the Harmonized Model by now contains packages for 52 standards with 112 parts, editions, amendments, and corrigendum.

For most standards developed by ISO/TC 211, a conceptual UML model is the foundation. The standards documents are formal documentation. Normative statements support the models, conformance classes and conformance tests to describe how to use and formally comply with the standards. For the technical implementation, the UML model and the derived resources for implementation are the essential artefacts.

UML modelling of geospatial information in the Harmonized Model is based on a Model-Driven Architecture (MDA) defined in ISO 19103, with four levels of abstraction, as illustrated in Figure 1, from (Jetlund et al., 2019): 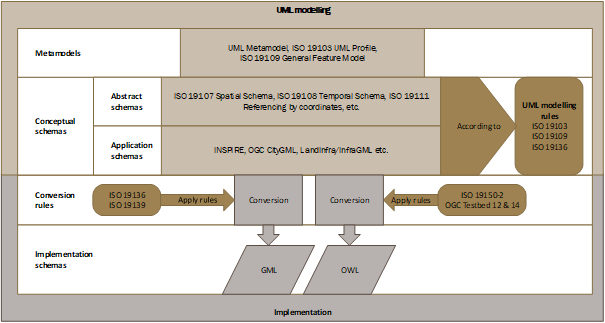 The upper-most level contains metamodels that define how UML shall be used for describing geographic information, while the second and third levels contain conceptual models that are modelled according to the metamodels and standardized rules for UML modelling. The conceptual models are independent of any implementation technology but may contain semantics needed for implementation.

The second level contains abstract models of basic concepts for representation of, e.g., geometry and coordinate reference systems. These elements are the core building blocks for more application-specific models for applications such as land administration or road networks at the third level. For the most, ISO/TC 211 has focused on the core concepts of geographic information, defined at the abstract conceptual level, while only a few application schemas are standardized by ISO/TC 211. The models of core, abstract concepts need to be stable, while application schemas need more flexibility than what is usually possible for ISO standards. Authorities, agencies, and organizations worldwide have developed a wide range of domain-specific application schemas based on ISO/TC 211 UML models, such as OGC, INSPIRE, IHO, TN-ITS and National Mapping Authorities.