Climate change - how ISO 14001 helps including with adaptation

One of the major challenges that face us all is that of mitigating and adapting to climate change. Internationally, work has progressed from the formation of United Nations Convention on Climate Change (UNFCCC) which is used to signify both the Convention (agreed in 1994), the Secretariat and frequently also the countries that are members of the Convention.

At the end of 2015, countries negotiating a new agreement under UNFCCC agreed the Paris Agreement which came into force on 4 November 2016. Under the Paris Agreement countries agree to hold the global temperature increase due to increase in greenhouse gas (GHG) emissions, to below 2 °C, aiming at 1.5 °C. This commitment is realised through a commitment at national level to reduce national GHG emissions. Additionally, countries agreed to support action to adapt to the consequences of climate change. Most of the policy and regulatory framework associated with the Paris Agreement have yet to emerge and be agreed (as at 30 November 2016).

Achieving the Paris Agreement will require innovative approach and contributions from all of use including organisations. Paris Agreement is both a challenge and an opportunity. It may create business opportunities for organizations. 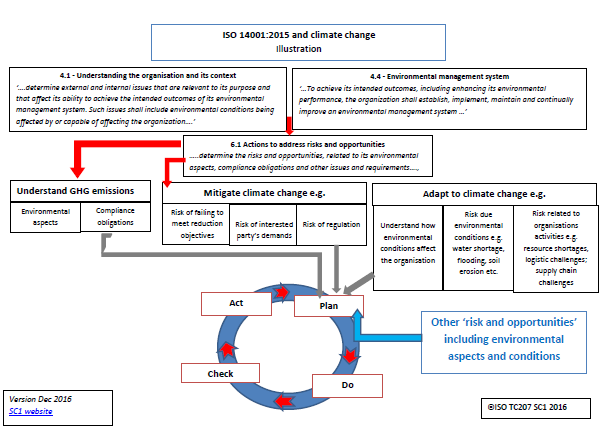 Climate change how ISO 14001 helps including with adaptation

Material will be added to this section as more is developed