SC1 is honoured and pleased to h 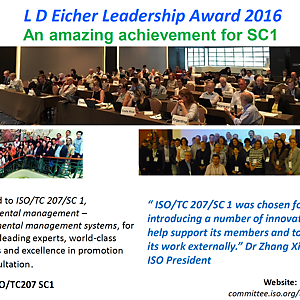 In accepting the award SC1 leadership thank all in the wider ISO community for presenting ISO TC207 SC1 with the Lawrence D. Eicher Leadership Award 2016 and specifically noted that this award recognises the significant contribution that all national member bodies, liaison organizations, working group leaders and experts in SC1 have made to the success of SC1 and in support of its standards.

Much to their deep regret, both the chair Dr Anne-Marie Warris and the Secretary of SC1 Mike Henigan were unable to attend the ISO General Assembly to receive the award despite having made every effort to travel to Beijing unfortunately fates were against them which only became clear late on Friday 9 September 2016.

Note : The Lawrence D. Eicher Leadership Award is a prestigious award that recognizes the significant contribution and superior performance of an ISO technical committee or subcommittee to the development of ISO International Standards. The award is designed to encourage creative and collaborative work by rewarding the implementation of innovative and efficient processes and solutions that ensure the provision of excellent services. It is also an opportunity to publicize and share best practice among ISO committees.

First awarded in 2003, this award is named in honour of ISO's late Secretary General, Lawrence D. Eicher, whose 16-year tenure at ISO (from 1986-2002) saw the organization evolve from an institution with a predominantly technological focus to a market-oriented organization whose standards are increasingly recognized as bringing, in addition to solutions to technical problems, wider social and economic benefits.