A resilient biodiversity and stable climate go hand in hand, and ISO standards can leverage the synergies between them. 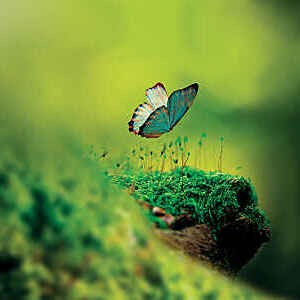 The 27th Conference of the Parties (COP27) to the UN Framework Convention on Climate Change (UNFCCC) is being held in Sharm El-Sheikh, Egypt, on 6-18 November 2022. ISO and its members join ranks with world change makers to showcase how International Standards help transform climate commitments into action. Our coverage of COP27 provides an overview and greater insights of ISO’s work in this area, from in-depth features to thought-provoking think pieces.

Over half of global GDP is dependent on nature. Yet our biodiversity, which has broad social and economic importance, is threatened from all quarters, with grim consequences for ordinary people. ISO is working on biodiversity to promote a healthier relationship between our economies and our ecosystems, and encourage the preservation of biodiversity while creating opportunities for sustainable development.

We are all interdependent and biodiversity breeds resilience. We depend on biodiversity for all of our food and numerous raw materials and resources, such as timber, cotton, wool and even clean air and water. It is not just the resources themselves we depend on, but the animals and plants that contribute to them within a connected multiplicity.

Above ground, for example, a third of the world’s crops depend on pollinators such as insects and birds. Important foods such as almonds, blueberries and cherries would not exist without them. Below ground, many invertebrates maintain the soil so that it is healthy, and bacteria play a crucial role in freeing nutrients such as nitrogen, the building block of all proteins.

And yet biodiversity is under unprecedented threats. In its Global Risks Report 2022, the World Economic Forum includes threats to biodiversity in the top three risks, alongside a lack of action to deal with climate change and extreme weather. Moreover, all three are interrelated, with synergies that can be beneficial or catastrophic, depending on how we manage them.

So just how great are the risks to biodiversity? According to the Intergovernmental Science-Policy Platform on Biodiversity and Ecosystem Services, one million of the world’s estimated eight million animal and plant species face extinction and three-quarters of the Earth’s land surface has been significantly changed by human activity.

Habitats are natural sinks for carbon, so their loss makes climate change worse, which in turn affects habitats and the species that depend on them. The United Nations reported that in a world that is 1.5 °C warmer, 4 % of mammals would lose half their habitats.

The benefits of restoration

If there is one statistic that summarizes these losses like a budget, it is that we are using the equivalent of 1.6 Earths to sustain our lifestyles, with natural resources and nature unable to keep pace. And according to the United Nations Environment Programme, we need to restore ecosystems to tackle both climate change and save species from extinction.

Fortunately, there is growing evidence that the door is now revolving both ways for biodiversity, with losses being counteracted by gains through restoration and nature-based solutions, such as stewardship of natural ecosystems and climate change adaptation. Indeed, the word restoration will get increasing airtime from now on, as it is a no-brainer, according to the latest scientific evidence.

Researchers from Australia and Brazil, for example, found that we could cut extinctions by 60 % by restoring a mere 15 % of ecosystems in priority areas, notably Asia, Africa, and Central and South America. Furthermore, such action could remove about a third of the carbon dioxide produced by human activities since the industrial revolution. If we were more ambitious, then restoring 30 % of the world’s ecosystems could prevent about 70 % of projected losses of species, as well as absorb half the carbon dioxide emitted.

One of the biggest systemic threats to biodiversity is from agriculture replacing natural habitats, such as monoculture plantations replacing species-rich rainforests and grasslands. On the other hand, where such activities are carried out with the aim of sustainability and conservation, then industry standards, such as those from the Forestry Stewardship Council (FSC), have reaped benefits. The FSC has developed a standard and runs a certification scheme for sustainable timber.

The time is ripe for ISO standards in biodiversity.

There are now dozens of such standards and schemes, but their success in fostering conservation and sustainability depends on these industry standards being comprehensive, benchmarked and strictly applied. Other research from the International Institute for Sustainable Development found that industrial and commercial standards for sustainable agriculture can contain significant requirements for conserving biodiversity, but the implementation of these standards is driven by market forces and not wholly aligned with biodiversity protection.

Researchers concluded that policy makers have a key role in promoting a more effective application of voluntary standards. The recommended policy options included implementation driven by biodiversity, and a policy framework for credible implementation. In other words, using tools which are bread-and-butter for ISO standards. This is because it is difficult for legislators and policy makers to mandate or even endorse industry standards, whilst ISO standards often feature in both policy and law.

Which means that the time is ripe for ISO standards in biodiversity.

A world first for biodiversity

ISO is developing guidelines on specific biodiversity issues, such as ecological engineering, nature-based solutions and relevant technologies. Led by technical committee ISO/TC 331, the aim is to ensure long-term biodiversity conservation through an efficient mix of requirements, principles and supporting tools, and doing so in a holistic, unifying and global approach.

The expert group carrying out the work asserts that harmonizing practices will also be very helpful to provide reliable and comparable information between countries and projects. Organizations the world over need a common understanding of biodiversity, together with a framework to take action. Additionally, we need methods and tools to assess impacts and track progress, as well as concrete examples to follow.

The International Standards developed for biodiversity will fit within four themes which are: common language; measurement, data, monitoring and assessment; restoration, conservation and protection; and organizations, strategies, and sustainable use of natural resources. At the same time, it’s imperative that these biodiversity goals find synergies and avoid conflicts with the Paris climate agreement and the United Nations Sustainable Development Goals (SDGs), neither of which existed a decade ago. Using a targeted approach, the ISO experts have therefore developed a roadmap for standards on biodiversity that will directly support the SDGs and the Convention on Biological Diversity.

Naturally, the road to conservation will be long and complicated. This is inevitable because life on Earth is as complex as it is beautiful, with many global systems influencing its biodiversity. Our future depends on our ability to protect the planet. We have reached a tipping point where we are now acutely aware of the threats to the natural world. Humanity is ripe for action, and the world’s biodiversity can only reap the benefits of this awakening.