The secret to SDG success 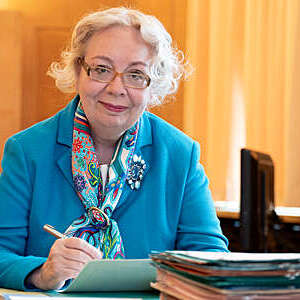 Tatiana Valovaya, was appointed Director-General of the United Nations Office in Geneva (UNOG) a little over two years ago. The first woman to hold the top-spot at UNOG, Tatiana is a vocal advocate for gender equality and women’s empowerment. She is breaking boundaries in many ways.

At the end of the 76th United Nations General Assembly in September 2021, everyone shared the same concerns and unwavering commitment to overcome a growing array of global challenges. While a great deal was discussed, a clear set of issues arose time and again, with multilateralism emerging as the unifying solution for a more sustainable, resilient world.

Advocating this new type of multilateralism is Tatiana Valovaya, the Director-General of the United Nations Office in Geneva (UNOG). A key priority for the UNOG Head will be the implementation of the UN’s Global Agenda and its 17 Sustainable Development Goals (SDGs). We sat down with Ms Valovaya to discuss development, multilateralism, all things gender, and much more.

You are the first woman to be appointed Secretary-General of the United Nations Office at Geneva. What are you most proud of in your current work with the UN?

I’m very proud that I’m working for the United Nations Organization. Our mission is more important than ever because we are in a situation of global crisis – not just a health crisis, but an economic and social crisis. 2020 also marked the 75th anniversary of the United Nations. Under the UN75 global dialogue initiative, we conducted a global online survey with ordinary citizens around the world. The results are telling: 87 % of people want more multilateral cooperation to respond to world crises. They want global solutions to global challenges. I’m very proud of being part of a system which can provide the overarching solutions the world needs.

How can we continue to break down the barriers that exist for women in the workplace today?

Well, I think we should begin by widening access to education. All my life, I have worked in international economic affairs in very prominent positions. Getting there wasn’t easy. In my day, international affairs were not considered a proper field of study for women, but I managed to do it because I graduated from school with excellent marks all round, allowing me to join the Faculty of International Economic Relations of the Moscow Finance Institute. If I hadn’t, I wouldn’t be where I am today. So everything starts with education at the very basic level, from school right through to university. After that, women need equal opportunities at every step of their career, but it starts with education.

You have advocated many times for multilateral solutions to combat the global challenges of the 21st century. How can they help us respond to the world’s most pressing issues?

The global pandemic, climate change, economic and social inequities, gender inequality… all these things are global challenges to which we really have to find multilateral, global solutions. But what I’m advocating precisely is a new type of multilateralism. The UN Secretary-General has said several times that we need inclusive networking and integrated multiliteracies, because international decision making now includes not only the voices of Member States, represented by their governments, but also of local, regional and international organizations (such as ISO), non-governmental entities, the private sector and others who are often overlooked, such as young people and women. We have to offer everybody well-balanced decisions and we have to fully understand the consequences of these decisions.

This multilateral response is also important when we’re discussing any of the global solutions required to implement our roadmap. As previously said, climate change can only be fought with standards because there is a whole range of standards designed to help specific industries become more climate-friendly. Standards will provide us with very good instruments that the Member States can use in their respective countries to help collectively reduce our footprint on the environment. So, of course, standards need to be part of any multilateral suggestions.

You mention this “new multilateralism” as a different form of cooperation. How do you envisage standards supporting our global economy in the future?

Today, we find ourselves in a world of so much division, self-interest and unilateralism. The urgency for all countries to come together has rarely been greater. We need more nations and more leaders to uphold the principle of multilateralism – of cooperation, of consensus building, of joint action in world relations and world affairs. Take, for instance, Russia’s accession to the World Trade Organization, which I was involved in at the time. This was very important for us in many ways, since standards were viewed as essential to making our economy more efficient.

Later, during my tenure at the Eurasian Economic Union (EAEU), I was in charge of integration and macro-economic issues. There were often discussions between the five Member States about which national standard to take. It soon became obvious that EAEU regulations were not just about using one country’s national standard because it’s the biggest country or the country with the longest history of working on a given subject. Instead, they should constitute a new legal norm based on the most up-to-date national standard, also taking into account international best practice from the scientific point of view.

Standards should not be perceived as a burden but as a booster.

It’s encouraging that Member States don’t just say, “I want to keep my national standard because it’s convenient”. Instead, it’s important that they understand that “if I keep my national standard, I will not develop my industry, but if I introduce overarching standards that give my economy a boost, then I will be able to compete in the international arena”. I believe it’s important to understand that standards can be something that moves national economies forward to become more competitive.

Standards should not be perceived as a burden but as a booster. For example, when I was working at the EAEU, we introduced at Union level a number of emissions standards for cars – the stages for emissions regulations typically referred to as Euro 3, Euro 4, Euro 5, and so forth, for light-duty vehicles. Despite the high cost for manufacturers, we went ahead because we felt that we were really doing something towards the fight against climate change. If you know what you are doing, and why you are doing it, it gives you a competitive edge and you are better equipped to compete on the global stage.

The world’s common enemy right now is COVID-19. How can a global and immediate issue like this drive faster decision making and consensus building among societies today?

The pandemic has shown us in a very tangible way how interdependent we are. Isolation is not the answer. Countries that took measures to isolate themselves only helped the virus spread more widely around the world, and now we’re all in the same boat. We really need to find global solutions because national solutions will work for a while, but they are not going to work long term. What the pandemic is really telling us is that we need a common strategy to decide on appropriate measures and how to coordinate them to make them more effective. And, of course, we need a global strategy to provide a vaccine for everyone around the world.

Digital solutions have enabled us to get through these past months. How can we take fuller advantage of modern technologies for the benefit of society?

There was talk about the world entering a digital era even before the pandemic. It just hit the workforce a little sooner than expected. I really think this digital world gives us the opportunity to listen to everybody’s voice. I have already mentioned the UN’s global online survey, which provides insights into world views. My belief is that this type of direct democracy will increasingly become the norm in our medical policies going forward. It will help us to reach a wider audience and consider varying perspectives when making important decisions.

At the same time, we are experiencing a digital divide. While most of humanity is already living in this digital world, some 46 % are not connected to the Internet. If the future of education is digital, for example, but many young boys and girls do not have Internet access, what kind of education are they going to receive? So, while I think there are lots of opportunities, there are also many challenges.

The world has embarked on a “Decade of Action” to realize the United Nations Sustainable Development Goals. What role do standards play in supporting the UN roadmap for a better world?

First, let me say that the pandemic has made the 2030 Global Agenda more relevant than ever and we must do all we can in order to reach our goals. People often think that ISO standards are only related to very technical topics, such as electricity and the like, but they are so much broader than that. In fact, there are International Standards for every SDG. So, in this respect, standards can play a very important role. That means that we have to implement these standards because they offer, in my opinion, minimal requirements for many, many things, such as providing everybody with access to fresh, clean water.

To make that happen, you need a standard for what can be considered as “fresh, clean water”. Then, once you have a standard, you can really get to work on meeting that benchmark. So whatever the goal, there are standards of utmost importance in helping you reach it. Take another example, like the climate crisis. There are standards to help mitigate greenhouse gas emissions and adapt to climate change. So, while I do believe we have a roadmap, ISO standards provide the indicators we must consider in order to reach our goals.

There are International Standards for every SDG.

ISO and the UN have worked together since ISO’s creation in 1947. What more can be done to strengthen this collaboration for a more prosperous and sustainable world?

The UN cannot be content with “business as usual” to tackle the problems ahead. It needs a more inclusive multilateralism, which also includes dialogue with international organizations, because I am convinced that we all serve a common goal. The SDGs are about gender parity and climate crisis, among many other things. While the UN and ISO have different instruments to tackle these challenges, we can be very complementary because, quite often, these can only be addressed with the support of International Standards. Failing to use standards universally can create technical barriers that impede free and fair trade. That’s why I believe we can – and must – increase our cooperation. After all, we have the same interests at heart.