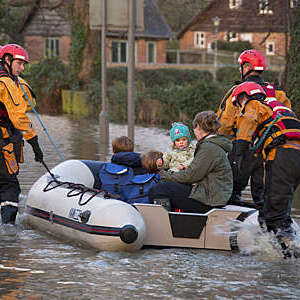 There is no doubt that we are now living in a world where surprise is the new normal. Increasing populations, resource exploitation and the resulting climate change effects are putting greater pressure on our ecosystems. As a result, floods, fires, earthquakes and other natural disasters are only set to increase, leading to greater loss of life, disruption and uncertainty. Local and national governments need to be better prepared in order to minimize losses should disaster strike. An effective early warning system is one key tool, and ISO has just developed an International Standard to help.

ISO 22328-1, Security and resilience – Emergency management – Part 1: General guidelines for the implementation of a community-based disaster early warning system, outlines processes that can help those in hazard-prone areas to get out in time.

Åsa Kyrk Gere, Chair of the ISO committee that developed the standard, said a community-based early warning system (EWS) is essential for virtually every locality, as rapid urbanization, climate change, declining ecosystems and other factors are increasing the risk of disasters everywhere.

“Having a well-thought-out and prepared EWS empowers communities to be more aware and react more quickly, thus literally saving lives,” she said. “It also helps to reduce the impact of such disasters, such as that to property, the economy and the environment.”

ISO 22328-1 is the first in the series of standards, with future parts giving guidance for specific types of disasters such as tsunamis, earthquakes and flooding, she added.

Implementing an EWS such as that described in ISO 22328 is also consistent with the Sendai Framework for Disaster Risk Reduction 2015-2030, that works together with other 2030 Agenda agreements, such as the Paris Agreement on Climate Change, and was endorsed by the United Nations General Assembly in 2015.

The framework advocates for the reduction of disaster risk and recognizes that the state has the primary role to play in this, but it should also be shared with other stakeholders such as local government and the private sector.

ISO 22328-1 was developed by technical committee ISO/TC 292, Security and resilience, whose secretariat is held by SIS, ISO’s member for Sweden.

The standard can be purchased from your national ISO member or the ISO Store.