How standards help the cream rise to the top 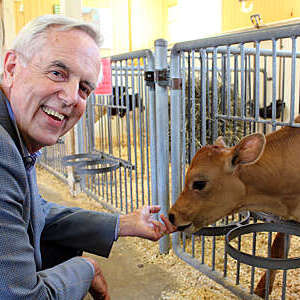 Raised on a dairy farm in southern Ontario, Canada, the young John Walter, now CEO of the Standards Council of Canada, never thought that a childhood spent milking cows would lead to a career in standards. Here, he tells us how life in the creamery can generate unsuspected rewards.

My quite accidental career in standards began almost at birth at the end of the Second World War. With countries torn apart by conflict, the world was picking up the pieces, and the creation of ISO in 1947 was one of the ways by which the international community sought to bring back peace, stability and confidence.

I was fortunate to have been born into a family that owned a large dairy farm on the outskirts of Goderich, Ontario. The milk collected on the family homestead was produced by Holstein cows raised to international breeding standards.

My great-grandfather was a Canadian pioneer in the use of glass bottles to store milk. Through his ingenuity, he helped develop standards for maintaining the cleanliness of these bottles.

Later, towards the beginning of the 1900s, my ancestors stopped bottling milk and began to manufacture ice cream and butter instead. This, of course, entailed the use of standards spanning many areas of the dairy farm and creamery business, such as pasteurization, homogenization, sanitation, storage, refrigeration… right down to the disposal of waste water. Today, ISO 8086 is one of many important standards for setting hygiene conditions in dairy plants.

My quite accidental career in standards began almost at birth.

I grew up in the dairy business and started work at age 12 for the princely sum of one dollar a day, eating all the ice cream my heart desired. Although the average person may not even know that standards exist, I was briefed early on about the tangible benefits they bring to dairy farms. Years later, I would discover that standards support virtually all products, services and systems in any industry.

In the creamery, I quickly learned the value of standards for equipment such as boilers and pressure vessels. I found out that ammonia was used for refrigeration and that steam had to be created for pasteurization and cleaning activities. To maintain water purity, proper sanitation and cleanliness were essential.

Grading cream was required to test for butterfat content. I discovered first-hand how metrology, the science of measurement, is vital for ensuring the proper size and content of containers destined to hold one pound of butter. I also acquired some knowledge of product control, including the fact that butter could only contain specific amounts of water, for instance.

After leaving the family business, I went to work for the Government of Ontario. My first job, which I held part time while attending the University of Guelph in Ontario province, was in a prison environment. On the surface, this would appear to be a major departure from the dairy farm business, yet my job at the facility entailed, believe it or not, milking cows!

Every step of the way

Standards would remain a daily fixture of my career for the next 18 years as a senior administrator for several Ontario correctional institutions. As you may know, prisons are self-contained communities requiring food storage and preparation, medical and dental services, educational and work programmes, and much more – all of which must comply with dozens of standards.

Having used standards for many years, both in my personal life and informally in my career, I became Assistant Deputy Minister, Technical Standards Division, for the Ontario Ministry of Consumer and Commercial Relations. During my tenure, I adopted and referenced codes and standards for boilers and pressure vessels, elevating and amusement devices, and fuels (oil and gas, petroleum, propane), helping to create a safe, productive and environmentally sound society for millions of people.

Thirty years on to the day, by another twist of fate, I left Ontario to embark on a career with the Canadian Standards Association – today known as CSA Group – as Vice-President of its standards development unit. There, I was responsible for the development and maintenance of more than 3 000 standards, codes, guidelines and other documents of considerable value to Canadian local government, industries and consumers.

What could be more enjoyable than an ice cream cone or sundae, whipped up thanks to the many benefits of standards.

After eight years at CSA Group, I was approached by the Government of Canada’s Minister of Industry to take on the role of Chief Executive Officer of the Standards Council of Canada (SCC). Now in my second term at SCC, I am responsible for overseeing Canada’s standardization network. This community of stakeholders from government, industry, consumer groups and academia, as well as experts on other related subject matters, promotes and strengthens the use of standards to improve the quality of life of the Canadian people.

Looking back, if there is one message I wish to endorse, it is this: every society around the world is based upon sets of standards that modulate the daily lives of billions of people. Most of these people have no idea how much their lifestyle and well-being rely on standards, developed and maintained by a small number of global standardization experts.

Anyone who is in any way involved in standards, or in standardization in general, should be proud of the outstanding work they do. What’s more, they have the privilege – and the onus – of telling their families, friends and colleagues about their work, thus helping to further the cause of standards.

For standards are the skeleton of an invisible infrastructure that keeps our modern society ticking, ensuring the lights in our homes turn on, appliances function and our tap water is safe to drink. As the blueprint for virtually everything that is produced in the world, standards are the guarantee of good health, safety, reliability, productivity, sustainability and so much more to all citizens.

After all, what could be more enjoyable on a warm summer’s day than an ice cream cone or sundae, whipped up thanks to the many benefits of standards.

John Walter is Chief Executive Officer of the Standards Council of Canada and Vice-President (Policy) of ISO for the 2014-2015 term. Mr. Walter’s many ISO duties include leadership of ISO’s Strategy and Policy Committee, supporting achievements of the ISO Strategic Plan and ensuring effective communication on strategic issues within ISO and with its stakeholders.