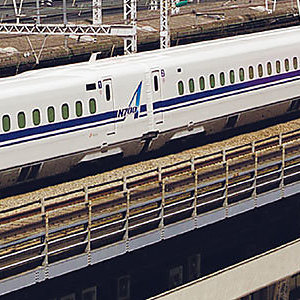 Bullet trains whisk passengers between city centres at speeds of 200 miles per hour or more. And their speed capabilities are only getting faster. This year's devastating crash of a high-speed train in Spain, which left nearly 80 dead, has drawn renewed attention to rail safety. It was preceded by another high-profile rail crash in Canada when an unmanned runaway train killed 40 people.

How do these recent rail crashes impact the industry ? What does this mean for the future of rail ? Can International Standards contribute to rail’s safety record and global growth ? ISOfocus sits down with Dr. Yuji Nishie, the Chair of the new ISO technical committee on railroad applications (ISO/TC 269), to discuss the latest issues surrounding safety, the priorities for the rail industry and the most pressing challenges for standards.

ISOfocus : With high-speed bullet trains and densely packed urban lines, Japan has one of the busiest railway systems on the planet. Why do we need standards for railroads ? And why now ?

High-speed rail offers the option to travel at fast speeds across hundreds of miles between downtowns in many of the world’s largest metropolitan regions. The bullet trains that zoom through France and Japan, for instance, have been in operation for more than 30 years and provided billions of rides.

Dr. Yuji Nishie : Japanese railway systems, including the Shinkansen high-speed train network, regional/urban railways, subways, monorails and so on, carry 23 billion passengers a year. In the Tokyo metropolitan area, railway systems transport an annual 13 billion commuters, equating to 58 % of the passenger demand. The Shinkansen bullet train departs from Tokyo station a staggering 14 times per hour, ferrying 292 million travellers a year across the country.

Remarkably, it boasts a zero-fatality record in its 50-year history of high-speed rail services.

Despite the recent rail crashes in Canada and Spain, rail is the best mode of transport for both passengers and goods. Its strong safety record and minimal environmental impact secures rail’s future in the coming decades. Its technologies have been developed and refined to fulfil local needs, producing successful and proven railway systems worldwide.

Reaching a common understanding of the world’s railway systems through International Standards will be extremely beneficial. These future standards will provide industry best practice and know-how based on the world’s most efficient rail systems, and will be used in the development of new railways or in the improvement of existing ones.

What are your ambitions in terms of International Standards ? Where do you see the benefits and challenges for rail ?

Since the railway industry began its commercial operation in the early 19th century, railways have been enriching people’s lives and contributing to the development of societies and economies. In recent years, however, the advantages of trains, including their environmental benefits, have been re-evaluated in the light of today’s battle against climate change.

Fifty years since the opening of the Japanese Shinkansen – considered the dawn of high-speed rail – we can witness a number of networks quickly expanding around the world. In developing countries, for example, the rapid mass transportation capacity of railways has attracted more and more attention as a boost for economic development.

Many railway construction projects, including high-speed rails, urban transit systems and freight railways, are currently being planned around the globe.

But there are challenges. Many developing countries have yet to benefit from the high level of safety, environmental sustainability, convenience, and cost efficiency of railway systems. Therefore, in order to spread rail systems quickly and efficiently around the world, and for all countries to benefit from well-managed rail services, international standardization of the rail field is absolutely essential. We must address the growing need to globalize railways through our standardization work, by making vast scopes of railway technologies more comprehensive and coherent.

Japan has an excellent railroad safety record. How might International Standards be applied to enhance safety worldwide ?

Railway safety should be secured throughout the entire life cycle, from planning, design and manufacturing, to construction, operation and maintenance, through to renewal and disposal. Although practical measures to achieve railway safety differ in every country or region, for scientific reasons, the fundamental policy is comparable.

A railway’s safety strategy should be established according to background and environment, by taking into consideration the transfer density and frequency required, the need for dedicated or mixed operation, natural or man-made disasters, as well as social, economic and environmental factors. Applying International Standards to every stage of the railway’s life cycle will help to enhance safety in each country or region.

Passengers carried
The total number of passengers from 1964 to 2009 was approximately 9.2 billion people

Average delays
The average delay time per trip is under one minute, including weather-related delays

How did your interest in railroads develop ?

What motivates you to get involved in this work ?

I have always had a keen interest in transportation system technologies, such as railways, automobiles, ships and aircrafts, but finally decided on rail and joined the former Japanese National Railways (JNR) in 1979.

At that time, JNR was operating under terrible conditions including a growing debt, frequent strikes, and a strenuous relationship between management and labour unions. Nevertheless, Shinkansen trains were operated safely with no delay.

When I first began my professional career, my aim was to innovate Japan’s railway systems – and perhaps to some extent help “fix” some of JNR’s problems. After JNR’s privatization and separation into the Japan Railways (JR) group in 1987, the conditions of each JR group company improved dramatically.

Today, my primary goal is to work together with an international group of colleagues and experts to provide the rail industry with a harmonized set of International Standards. I would like to fully dedicate myself to the activities of ISO/TC 269 so that we can meet the expectations of all stakeholders, from railway operators and infrastructure managers to manufacturing and construction companies, and last but not least governmental authorities.